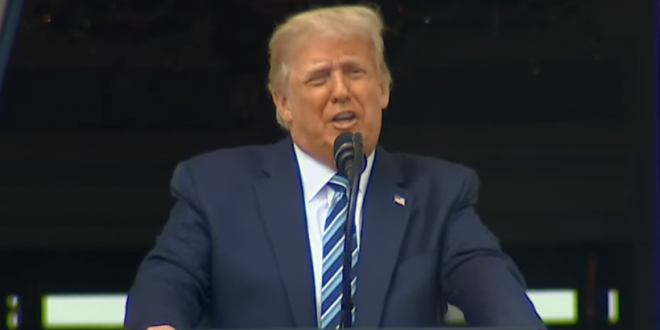 When President Trump, recovering from the novel coronavirus, welcomed hundreds of people on Saturday to what resembled a campaign rally on the White House grounds, the guests filed onto the South Lawn past a military band in resplendent red, its horns blasting the tune “America” from “West Side Story.”

The use of the United States Marine Band for a de facto political rally, where guests donned “Make America Great Again” hats and “Blexit” T-shirts — backing a movement that urges Black Americans to exit the Democratic Party — marked another instance of the president pushing the boundaries of U.S. law and the military tradition of political neutrality.

The band has played at every presidential inauguration since 1801, when President Thomas Jefferson gave the group the title “The President’s Own,” according to its online history. The band is called upon when the president is discharging his duties as head of state.

NEW: Trump used the US Marine Band, known as “The President’s Own,” at the rally on the White House grounds yesterday, thrusting the military into a partisan political event. https://t.co/Wb94Rumf2M