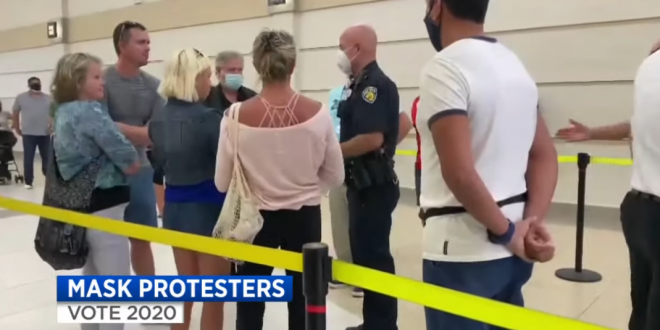 Police responded to an early voting site in Fort Lauderdale on Monday after a poll worker told four voters they couldn’t vote without masks. But after police consulted with Broward County Elections Supervisor Peter Antonacci, the voters were allowed back into the polling place to cast their ballots, still without masks on.

At around 12:45 p.m. at Coral Ridge Mall, police were called after a dispute between a poll worker and the group of maskless voters — one man and three women — according to a police report.

Initially, police escorted them outside, where the voters claimed they had medical conditions that prevented them from wearing masks and “insisted they were allowed to vote.” An officer told a poll supervisor at the site that, “as long as persons without masks are not themselves causing a disturbance, it is not a police matter.”

A YouTube video uploaded Monday afternoon shows a person in the mall getting yelled at to wear a mask, and it appears to be from the same people affiliated with the Reopen South Florida group.

The group has been lobbying to remove rules meant to stop the spread of COVID-19, and among their demonstrations was a maskless march through the Target store at that very same mall last month.

Broward’s elections supervisor doesn’t have the authority to enforce a mask mandate, but through an early voting and election day polling site trespass affidavit, the supervisor has granted local law enforcement agencies across the county to remove disruptive or unruly people from voting sites.

Previous Bolsonaro Is Latest Authoritarian To Endorse Trump
Next Giuliani: Even If My Hunter Biden Smear Isn’t Accurate, “The American People Are Entitled To Know About It”