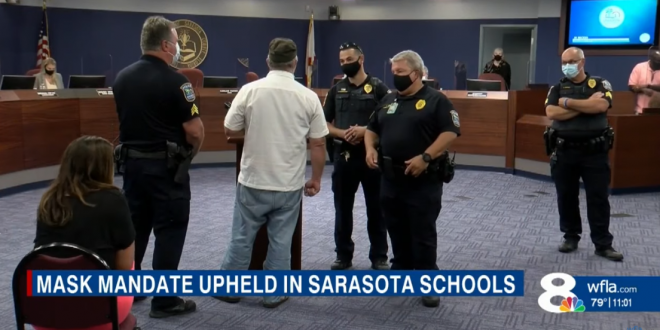 A community debate over a large Florida school district’s requirement that students wear masks erupted at a board meeting Tuesday evening with police removing a man not wearing a face covering as he spoke against the mandate. “You cannot force me to breathe carbon dioxide, lady,” the man said, according to a video by NBC affiliate WFLA in Tampa. “I am to breathe oxygen,” he said, with his mask appearing to be pulled down over his chin.

In another sign of the contentiousness over the mask rule for the district of over 40,000 students, school officials reported to the FBI just hours before the meeting an image of a person pointing a gun that was posted to social media by a group called Sarasota County School District Transparency Project that apparently opposes the district’s mask requirement. The image, which was posted to Facebook two weeks ago, is a YouTube link and is captioned, “Karens Fight Back!”.