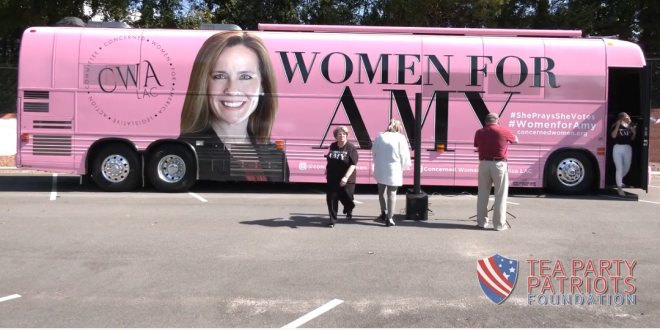 A prominent conservative women’s group held a prayer event on Capitol Hill Monday as part of a 12-state bus tour advocating in favor of confirming Judge Amy Coney Barrett to the U.S. Supreme Court on the first day of confirmation hearings.

Concerned Women for America, a nonprofit organization committed to protecting and promoting “Biblical values and Constitutional principles through prayer, education, and advocacy,” has embarked on its “Women for Amy” bus tour.

You may recall that the head of Concerned Women, Penny Nance, claims that atheism caused the Holocaust.

The @CWforA have arrived in their pink mega bus on @LibertyU campus to show support for Amy Coney Barrett. pic.twitter.com/h9tASVu4aR

The great @SenatorLoeffler joins us to kick off our “Women for Amy” Bus Tour! #ConfirmAmy pic.twitter.com/DSuIINvBIO