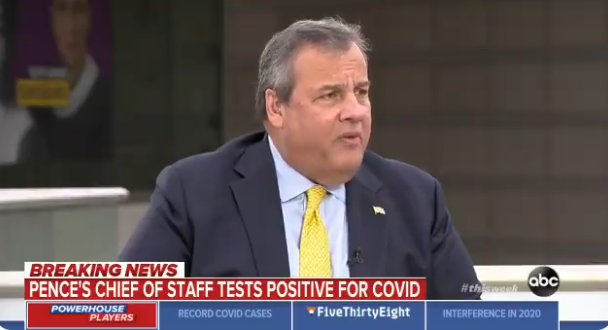 Former New Jersey governor Chris Christie (R) said Sunday that he was “a little bit surprised” that Pence is sticking to his campaign schedule, given that two of his top staff members have tested positive for the coronavirus.

“Everybody’s got to put the health of the people they’re going to be in touch with first,” Christie said during an appearance on ABC News’s “This Week.” “You’ve got to keep yourself away from everybody, and I’m a little bit surprised,” he added.

Christie is a close ally of Trump. But earlier this month, he admitted in a frank statement that he was “wrong” not to wear a mask at a Sept. 26 White House event where the coronavirus spread among several attendees.

“Everybody’s gotta put the health of the people they’re going to be in touch with first,” Chris Christie says, adding he’s “surprised” Vice President Pence still plans to be on the campaign trail, despite two of his top aides testing positive for COVID-19. https://t.co/rvoCKi0qh3 pic.twitter.com/szEYdZEYiY