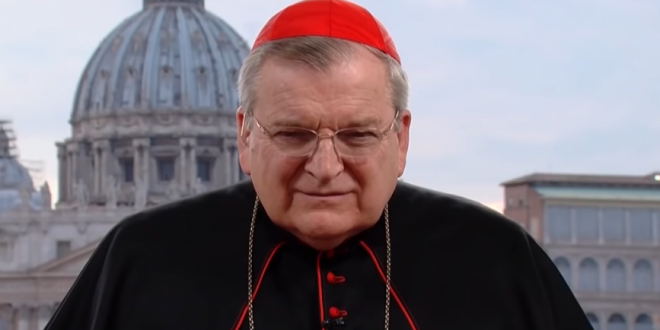 Cardinal Blasts Pope: Those Suffering The “Homosexual Condition” Should Have No Right To “Form Families”

First of all, the context and the occasion of such declarations make them devoid of any magisterial weight. They are rightly interpreted as simple private opinions of the person who made them.

These declarations do not bind, in any manner, the consciences of the faithful who are rather obliged to adhere with religious submission to what Sacred Scripture and Sacred Tradition, and the ordinary Magisterium of the Church teach on the matter in question.

The particular and sometimes deep-seated tendencies of persons, men and women, in the homosexual condition, which are for them a trial, although they may not in themselves constitute a sin, represent nonetheless an objectively disordered inclination.

The faithful, and, in particular, Catholic politicians are held to oppose the legal recognition of homosexual unions. The right to form a family is not a private right to vindicate but must correspond to the plan of the Creator Who has willed the human being in sexual difference, “male and female He created them.”

To speak of a homosexual union, in the same sense as the conjugal union of the married, is, in fact, profoundly misleading, because there can be no such union between persons of the same sex.

In what regards the administration of justice, persons in the homosexual condition, as all citizens, can always make use of the provisions of law to safeguard their private rights.

It is a source of deepest sadness and pressing pastoral concern that the private opinions reported with so much emphasis by the press and attributed to Pope Francis do not correspond to the constant teaching of the Church, as it is expressed in Sacred Scripture and Sacred Tradition, and is guarded, protected and interpreted by the Magisterium.

Equally sad and concerning is the turmoil, confusion, and error they cause among the Catholic faithful, as is the scandal they cause, in general, by giving the totally false impression that the Catholic Church has had a change of course, that is, has changed its perennial teaching regarding such fundamental and critical questions.

PREVIOUSLY ON JMG: Cardinal Burke declares that Ireland is now “worse than the pagans” for voting to legalize same-sex marriage. Burke says he would deny communion to pro-gay legislators. Burke gets booted from Vatican post after clashing with Pope Francis. Burke says families should not expose their children to their evil gay relatives.