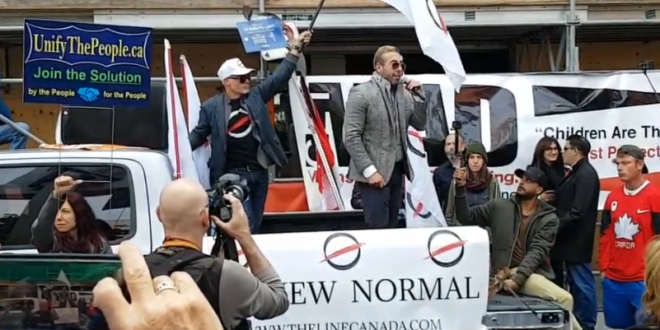 Toronto-based anti-mask activist Chris Saccoccia was arrested at the Moncton airport as he arrived to host an anti-mask event that was scheduled for Saturday. New Brunswick RCMP have confirmed that a 37-year-old man from King City, Ont., was arrested on Friday after they responded to reports of a disturbance at Greater Moncton Roméo LeBlanc International Airport. A video posted and shared by Saccoccia on Facebook shows him in a verbal exchange with a WestJet flight attendant.

An RCMP officer is then shown arriving inside the aircraft and telling Saccoccia he is under arrest for causing a disturbance. Earlier this week, both Sccoccias were charged with violating the federal Quarantine Act. Police said both were ordered to quarantine for 14 days when they returned to Toronto after travelling abroad. But on Oct. 3, police said the man and the woman were seen at a 500-person, anti-mask rally at Yonge-Dundas Square in Toronto.

Saccoccia last appeared on JMG in August when an anti-lockdown protest resulted in a bloody beach brawl involving chainsaws.