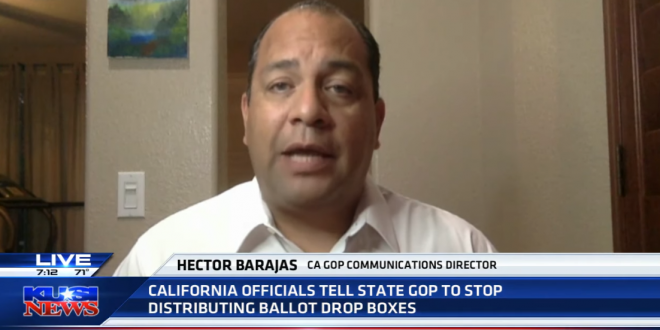 For years, Republicans across the country have decried the use of so-called “ballot harvesting,” arguing that laws that allow a third party to collect voters’ completed ballots serve as a breeding ground for election fraud. In California, the state’s Republican Party has taken Gov. Gavin Newsom and other officials to court over the practice.

Now, California’s GOP is defending its use of the very ballot collection law it once sued over. In recent weeks, gray metal containers labeled as ballot drop boxes have been placed at various locations — including gun shops, shooting ranges, churches and Republican Party offices — in several California counties.

California Republican Party officials have acknowledged responsibility for the boxes and have rejected allegations of wrongdoing, in defiance of what the state’s top election official and attorney general say is an illegal practice.

The California Republican Party said Wednesday it will not comply with the state’s cease-and-desist order over unofficial ballot drop boxes placed in at least four counties, escalating a brewing political showdown ahead of the November election. The unauthorized ballot boxes, which state officials have called illegal, have been found in at least four counties across the state: Los Angeles, Ventura, Orange and Fresno.

“Ballot harvesting program will continue,” California Republican Party spokesman Hector Barajas [photo] said in a statement to CNN. The party made their intentions clear in a letter to the California Secretary of State on Wednesday. In the letter, attorneys for the state GOP say all of the ballot boxes deployed by the party are indoors, staffed by volunteers or party officials, secure and not labeled “official.”