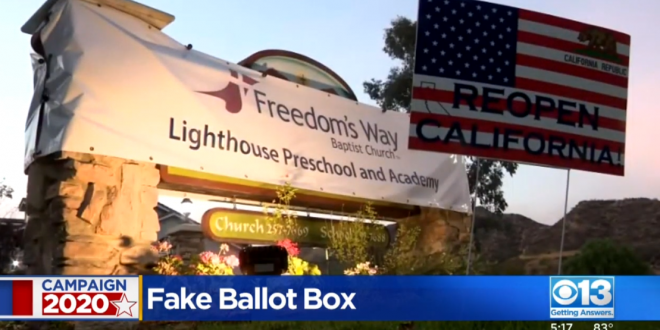 The California Republican Party has admitted responsibility for placing more than 50 deceptively labeled “official” drop boxes for mail-in ballots in Los Angeles, Fresno and Orange Counties — an action that state officials said was illegal and could lead to voter fraud.

The dark gray metal boxes have been popping up over the past two weeks near churches, gun shops and Republican Party offices, mostly in conservative areas of a deep-blue state, affixed with a white paper label identifying them as either an “Official Ballot Drop off Box” or a “Ballot Drop Box.”

To the average voter, they are virtually indistinguishable from drop-off sites sanctioned by the state, which are governed by strict regulations intended to prevent the partisan manipulation of ballots.

Hector Barajas, the GOP spokesman, said on Monday that “Democrats only seem to object to ballot harvesting when someone else does it.” On Twitter, the California GOP has similarly defended the ballot box scheme as lawful “ballot harvesting.”

On Twitter, the party claimed that Democrats legalized this practice and asked “why people are all of a sudden surprised.” It also trolled critics of the scheme, suggesting that fake drop boxes are more secure than door-to-door ballot collection.

Previous Biden: “I’m Not A Fan” Of Expanding Supreme Court
Next Zuckerberg Gives Another $100M For Election Costs