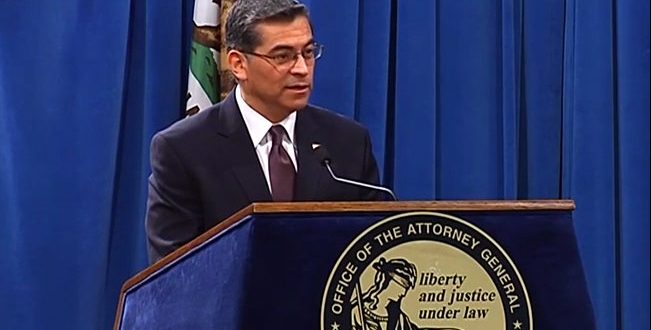 The state of California appears to be backing off legal threats against the California Republican Party over their use of unauthorized ballot drop boxes. On Monday, California’s secretary of state and attorney general sent a cease and desist order to the California GOP and several county party offices, ordering they remove unauthorized boxes to collect ballots, some of which were labeled “official.”

At a press conference on Friday, Attorney General Xavier Becerra [photo] and Secretary of State Alex Padilla, both Democrats, didn’t announce any additional enforcement action against the party, saying the California GOP agreed to modify how they were collecting ballots. The party’s spokesperson, Hector Bajaras, said the California Republican Party made no concessions to the attorney general or secretary of state and denied doing anything wrong in the first place.

Secretary of State Alex Padilla, a Democrat, said the state GOP had agreed to “no longer deploy these unstaffed, unsecured and unofficial ballot drop boxes.” The practice had drawn national interest as the major parties jockey for seats in California congressional battlegrounds that Democrats won in the 2018 midterms — and as Republicans continue to attack the state’s election system.

In an earlier response to Padilla, the California Republican Party said it would continue to accept mail ballots at boxes but promised some safeguards: The boxes will be attended to whenever the public has access to them, and ballots will be secured and then delivered to elections officials within the required 72-hour frame, the party said. The party pledged to not represent those boxes as “official.”

“The @CASOSvote and @AGBecerra didn’t know the facts and didn’t bother to learn them before accusing us on Monday. We can’t agree to not do something we weren’t doing to begin with. They could have shortened this press conference by simply saying ‘Sorry.’”