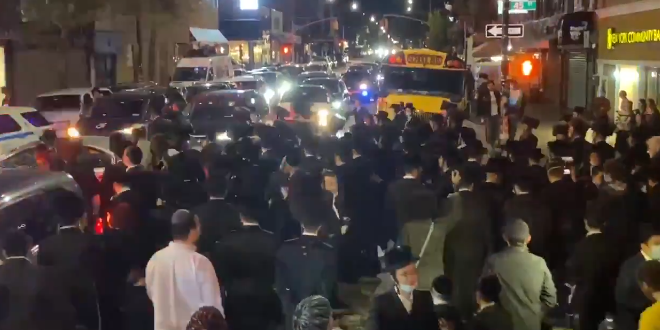 Harold “Heshy” Tischler strolled onto 13th Avenue in Borough Park at 9 p.m. Wednesday night, bare-faced and hoarse from days of screaming, and into the arms of an adoring crowd. Hundreds of ultra-Orthodox demonstrators chanted his name, waving Trump and Thin Blue Lines flags as they jockeyed for a chance to meet the brash right-wing radio host leading the campaign to stop the new COVID-19 lockdown measures.

“We are at war!” Tischler shouted to the crowd of protesters. “You are my soldiers!” An hour later, Tischler directed an angry mob of young Hasidic men as they surrounded and attacked Jacob Kornbluh, a veteran reporter with Jewish Insider. At Tischler’s urging, the group hissed and spit at Kornbluh, labeling him a Nazi and a “moser” — a term for a Jewish person who informs on their own community.

Hostile Hasidic demonstrators, hours after beating an innocent man unconscious and torching protective face masks, surrounded and attacked a reporter as they defiantly returned to the Brooklyn streets Wednesday to continue their protest against impending COVID-19 restrictions.  “Here in Borough Park, we don’t go by the laws of America,” said one in a group of people shouting at the journalists. “We have our own laws.”

At one point, Tischler addressed the growing crowd, shouting, “I’m going to take these children, these soldiers, these future leaders. These are my people. We’re going to create an army. We are at war with you, Mr. de Blasio. Here is my army.”  Tischler was caught on video calling Mayor de Blasio’s wife a “retard woman” and a whore during a protest Tuesday night. As of 11:20 p.m. Wednesday, no arrests were made — a contrast to the thousands of arrests and summonses during the city’s George Floyd protests in June.

President Trump linked to a video of members of the Orthodox community clashing with New York City law enforcement officers as they tried to disperse crowds protesting new coronavirus restrictions, referring to the scene as a “grim picture.” “Wow, what does this grim picture remind you of? I am the only thing in the Radical Left’s way! VOTE,” the president wrote in a tweet on Wednesday.

Trump linked to the video in “Casino” actor James Woods’ Twitter account, in which the conservative actor laid into Mayor Bill de Blasio, who along with Gov. Andrew Cuomo ordered the crackdown. “’Rounding up the Jews’ is an optic that I would never have expected to see in my American lifetime. DeBlasio is a criminal. No wonder he changed his name from Wilhelm. He is an anti-Semite thug piece of s—,” Woods wrote in his posting.

Residents in Borough Park have largely flouted public health rules on masks and gatherings, even as the positivity rate in the area has surpassed 8 percent, the highest in the five boroughs.

“Nobody here has the virus,” said a woman walking in Borough Park, adding that lockdowns were politically motivated by Democrats. “The president got the virus, he recovered. There are medicines now.”

Shulim Leifer, a Hasidic man and former Borough Park resident, said the community was plagued by right-wing misinformation about the virus. “What we witnessed is a community that is so lacking in responsible leadership that thugs and criminals like Heshy Tischler carry the day,” Leifer told Gothamist.

I was just brutally assaulted, hit in the head, and kicked at by an angry crowd of hundreds of community members of the Boro Park protest — while yelling at me “Nazi” and “Hitler” —after Heshy Tischler recognized me and ordered the crowd to chase me down the street

Heschy Tischler, the right wing radio host leading the Orthodox anti lockdown protests, is greeted in Borough Park to a hero’s welcome. Children standing on light poles try to get a glimpse. Older men jostling for selfies. Heschy declines a supporter’s offer of a mask pic.twitter.com/3MiyCx2q9l

Right now it’s basically a pro-Trump dance party. Lots of media here after last night’s violence, but no sign of similar chaos (though someone was chucking eggs a few minutes ago) pic.twitter.com/FJUZ5xpIm9

At Heschy’s urging, the crowd just surrounded and attacked journalist @jacobkornbluh. They pinned him against a wall and shouted “moyser” (“snitch”) as NYPD lost control of the situation. Really scary scene. Jacob is a pro pic.twitter.com/783MqbzTBe

Here’s Heschy egging then on. “He’s lucky time be alive,” one of the protesters told me after.

A few yards away, cops agree to close more streets, joking around with same men who just beat up a reporter pic.twitter.com/UekTnKQqrA

The scene on 13th Ave currently. Police are attempting to clear the streets. Not happening pic.twitter.com/jbzxb4CiAk

Cops are pulling out. “We stayed way too fucking long,” one of them says. “No way we were breaking that up.” pic.twitter.com/QrvVBayIHn