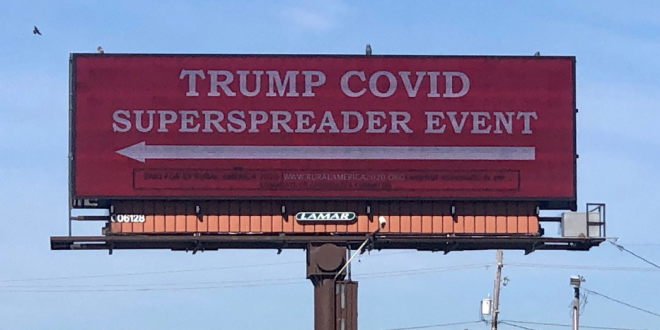 If you’re heading to President Trump’s rally at the Des Moines International Airport Wednesday, you may see a digital billboard along Fleur Drive. The billboard reads, “Trump Covid Superspreader Event,” with an arrow pointing toward the airport. Rural America 2020 posted the picture on Twitter commenting that it’s doing its part to warn Iowans about Trump being in the state. This comes after Des Moines Mayor Frank Cownie expressed concern about the health implications of Trump’s rally.

We’re doing our part to warn Iowans that @realdonaldtrump is in town tomorrow. This billboard is directly outside the Des Moines Airport where he will hold his hangar rally. #Superspreader #SuperspreaderTrump #covidiots pic.twitter.com/KtN9SebH4T