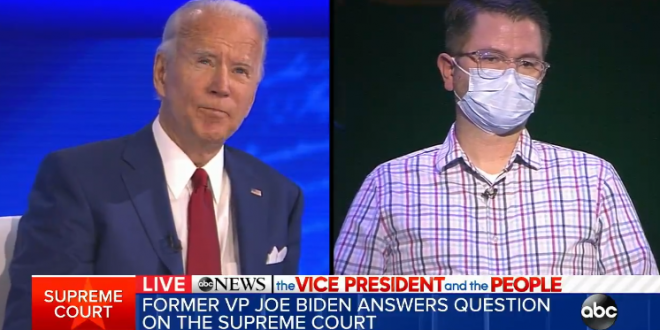 Tonight in Philadelphia, one voter asked, in the context of Amy Coney Barrett being rushed through a confirmation process to a seat on the bench of the Supreme Court, if the LGBTQ+ community should be worried about an erosion of its rights.

“I think there’s great reason to be concerned,” Biden started in his response. He went on to admit that he hadn’t been able to sit down and watch Barrett’s confirmation hearings which ended today, but had been reading coverage.

“My reading online of what the judge said was that she didn’t answer very many questions at all. I don’t even think she has laid out much of a judicial philosophy in terms the basis upon which she thinks are the basic unenumerated rights of the constitution itself, number one.”

Mieke Haeck, a physical therapist based in State College, Pa., told Biden she’s the “proud mom” of two girls, age 8 and 10, and the youngest child is transgender. Haeck, saying the Trump administration has “attacked the rights of transgender people,” pointing out the transgender military ban, weakening of non-discrimination protections and removal of the word “transgender” from government websites.

“How will you, as president, reverse this dangerous and discriminatory agenda and ensure that the lives and rights of LGBTQ people are protected under U.S. law?” Haeck said. Without any hesitation, Biden said: “I will flat out change the law.” The Democratic presidential nominee has said he’d sign the Equality Act, which expand anti-LGBTQ non-discrimination protections under federal law, within the first 100 days of his administration.

Asked what he would say to LGBTQ Americans and others who are worried “about erosions of their rights,” former VP Biden says “I think there’s great reason to be concerned for the LGBTQ community, something I fought very hard for.” https://t.co/JEyTOkB6qk #BidenTownHall pic.twitter.com/BnZ8XSOJSA

How will I ensure the rights of LGBTQ+ people are protected under U.S. law?

Am I surprised that Joe Biden gave such an empathetic answer on trans rights? No, he’s been doing this for quite some time. He was the first national leader to publicly support trans rights back in 2012. I wrote about it for @USAToday:#BidenTownHall
https://t.co/AfwGlN0CRU

Asked by a mother of a transgender child about what he will do to protect LGBTQ rights, Joe Biden says: “I will flat-out just change the law.” https://t.co/AHhqjfwTJc #BidenTownHall pic.twitter.com/mc4KkDnsmr

Previous Biden At Town Hall: “I’m Not A Fan” Of Court-Packing
Next Christie Urges Trump To Promote Wearing Face Masks: “I Let My Guard Down” And It Really Cost Me [VIDEO]