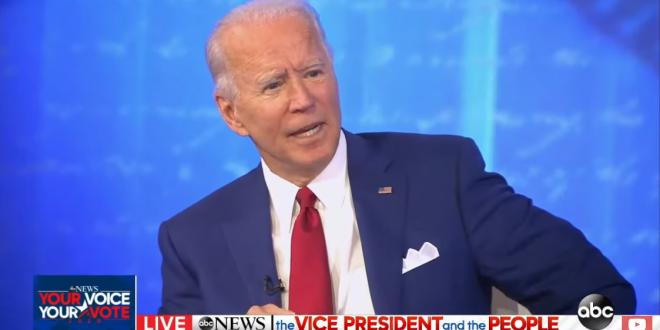 Biden At Town Hall: “I’m Not A Fan” Of Court-Packing

Joe Biden said he is “not a fan” of court-packing, but whether he ultimately seeks to push for more seats on the Supreme Court depends on how Senate Republicans handle the confirmation process of Amy Coney Barrett.

“It depends on how this turns out,” Biden said. Pressed on what that means, he said, “if there’s actually real, live debate on the floor” of the Senate. If that does not take place and Republicans rush to confirm Barrett before the election, he said, “I’m open to considering what happens from that point on.”

But he also said he was hesitant to take a specific position at this stage because he wants attention to focus on what confirming Barrett and handing conservatives a 6-3 Supreme Court majority would mean for abortion rights, health care, LGBTQ rights and more.

Pressed repeatedly by @GStephanopoulos on his position on court packing, Joe Biden says, “I’m not a fan … it depends on how this turns out,” adding that it depends on how Republicans handle the confirmation of Supreme Court nominee Amy Coney Barrett. https://t.co/JEyTOkB6qk pic.twitter.com/rpcrzh5aRO