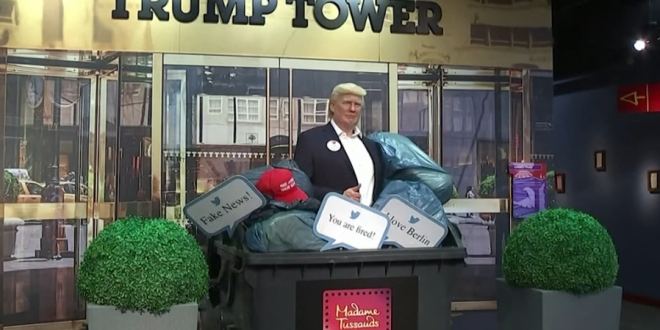 The waxwork museum Madame Tussauds in Berlin loaded its effigy of TV star-turned Republican president Donald Trump into a dumpster on Friday, a move apparently intended to reflect its expectations of next Tuesday’s presidential election.

In what seemed a further calculated insult, the statue of his predecessor and nemesis Barack Obama, who counted Germany’s Chancellor Angela Merkel among his closest allies, remained in place, beaming and besuited.

“Today’s activity is rather of a symbolic character ahead of the elections in the United States,” said the museum’s marketing manager Orkide Yalcindag. “We here at Madame Tussauds Berlin removed Donald Trump’s waxwork as a preparatory measure.”

Madame Tussauds in Berlin loaded its effigy of President Trump into a dumpster, a move apparently intended to reflect its expectations of #Election2020 https://t.co/YgPEZnLfnj pic.twitter.com/C7L6kVczNy