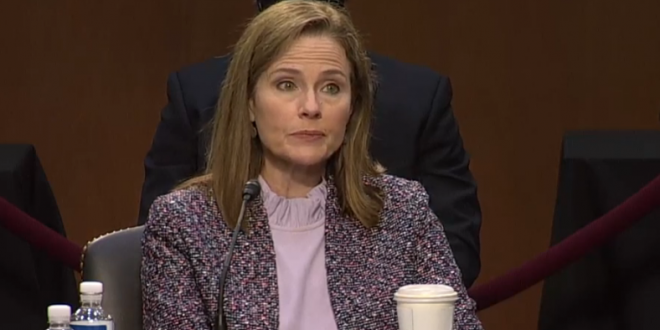 Barrett said Wednesday that she believed two Supreme Court decisions outlawing racial discrimination were correctly decided but declined to say the same for other landmark opinions involving gay rights and access to contraceptives. Those responses came under questioning from Sen. Richard Blumenthal (D-Conn.), who asked her whether Brown v. Board of Education, which outlawed the “separate but equal” doctrine, and Loving v. Virginia, which legalized interracial marriage, were correctly decided.

Then Blumenthal pressed Barrett on Griswold v. Connecticut, which allowed married couples to use birth control, as well as Lawrence v. Texas, which invalidated sodomy laws, and Obergefell v. Hodges, which legalized same-sex marriage. “Again, I’ve said throughout the hearing, I can’t grade precedent,” Barrett said. “I can’t give a yes or a no, and my declining to give an answer doesn’t suggest disagreement or an agreement.”

Cool, she can’t even say whether she agrees with Lawrence v. Texas, which decriminalized gay relationships. Hear that, ALL GAY AMERICANS? https://t.co/c9jgMliOQH

WATCH: @ChrisCoons outlines just how dangerous a Supreme Court Justice who is a self-proclaimed mentee of Justice Scalia — who referred to the “homosexual agenda” in one opinion and wrote MANY others against #LGBTQ equality — would be.#BlockBarrett #SCOTUSHearings pic.twitter.com/U7hcVYDhBY

She refuses to answer.

This judge does NOT belong on the Supreme Court.#BlockBarrett pic.twitter.com/zKlCuCqQYT