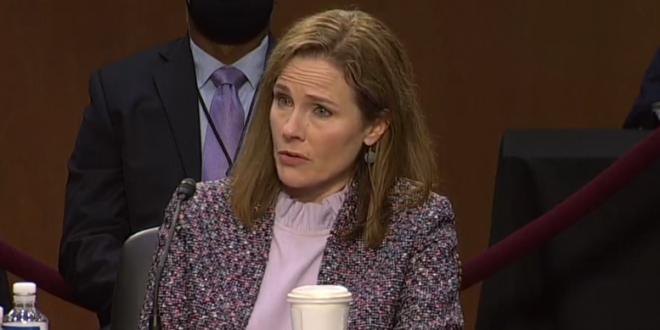 Barrett: “Open Question” If Trump Can Pardon Himself

President Donald Trump’s Supreme Court nominee Amy Coney Barrett on Wednesday said it is an “open question” as to whether Trump could pardon himself while adding that the top U.S. judicial body “can’t control” whether a president obeys its decisions.

Trump has said he has the “absolute power” to pardon himself, part of his executive clemency authority. Asked by Democratic Senator Patrick Leahy whether a president could pardon himself for a crime, Barrett said the “question has never been litigated.”

“That question may or may not arise but it’s one that calls for legal analysis of what the scope of the pardon power is. So because it would be opining on an open question when I haven’t gone through the judicial process to decide it, it’s not one on which I can offer a view,” Barrett added.