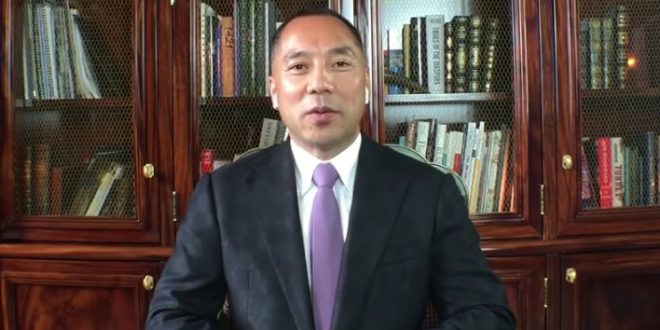 A prominent Chinese dissident pulls his children from school and flees his Texas home. A California-based democracy activist faces days of threats and harassment from protesters gathered in his driveway. Both were targets on a hit list of dissidents released last month by the exiled Chinese businessman Guo Wengui, who has claimed without evidence they are spies from the Chinese Communist Party (CCP).

“Let’s eliminate traitors in the world,” a cigar-wielding Guo told his followers in a video posted online last month. “Let’s get started, let’s finish with these traitors first.” In the days that followed, dozens of protesters have held daily demonstrations outside the Midland, Texas, home of Chinese pastor Bob Fu, a prominent figure among the evangelical Christians who make up a substantial number of U.S.-based Chinese dissidents.

Read the full article. As you may recall, Steve Bannon was living on Guo’s yacht when he was arrested. Before that, the pair made news when they hired half a dozen banner planes to fly anti-China messages around the Statue of Liberty. Bannon and Guo claim to be operating a Chinese government-in-exile they’re calling the New Federal State of China.