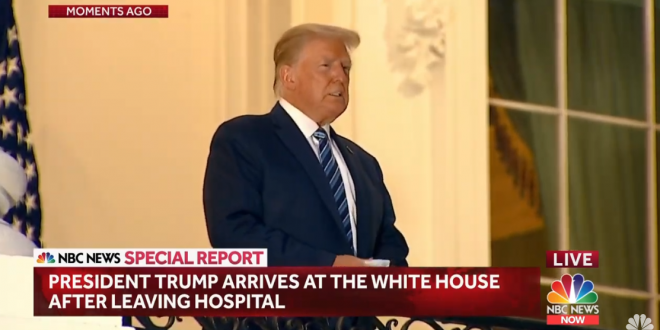 Atomic Scientists: Trump’s COVID Medications Make Him Untrustworthy With Nukes, He Is Not “Fully Lucid”

The Bulletin of Atomic Scientists reports:

President Trump is followed 24/7 by a military aide that carries the “football,” the briefcase that holds all he would need to order the immediate launch of up to 1,000 nuclear weapons, more than enough megatonnage to blow the world back into the stone age. He does not need the approval of Congress or the secretary of defense. Shockingly, there are no checks and balances on this ultimate executive power.

President Trump took the nuclear football with him to Walter Reed Medical Center, where he received treatment for COVID-19. According to Trump’s doctor, the president’s blood oxygen levels had dipped. And this, according to independent health experts, can impair decision-making ability. He is taking dexamethasone, which can cause mood swings and “frank psychotic manifestations.” Yet as far as we know, at no point did the president transfer his powers to the vice president, as allowed under the 25th Amendment.

To state the obvious, we should not entrust nuclear launch authority to someone who is not fully lucid. (Reagan transferred authority temporarily before planned surgery, as did President George W. Bush before a medical procedure that required his sedation.) A nuclear crisis can happen at any time, including at the worst possible time. If such a crisis takes place when a president’s thinking is compromised for any reason, the results could be catastrophic.

Read the full article. The opening paragraph at the link is something. The Atomic Scientists are best known for their Doomsday Clock, which forecasts how close the world is to a nuclear apocalypse.