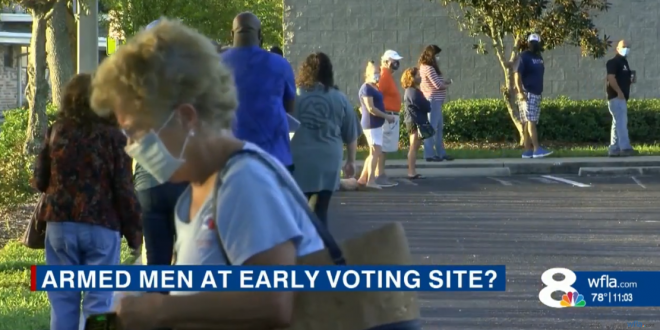 A Trump campaign spokesperson says two men dressed as armed security guards who set up in a tent outside an early voting location in downtown St. Petersburg were not hired by the campaign. Thea McDonald, Deputy National Press Secretary for the Trump campaign, told 8 On Your Side: “The Campaign did not hire these individuals nor did the Campaign direct them to go to the voting location.”

Julie Marcus, Pinellas County Supervisor of Elections, told 8 On Your Side the men set up a tent outside an early voting site on Wednesday and claimed to be with the Trump campaign. In the first presidential debate last month, President Trump encouraged his supporters to go to the polls to watch what happens there. Pinellas County Sheriff Bob Gualtieri plans to have a deputy presence specifically outside that polling place on Thursday.

From the Biden campaign:

In the United States of America, we cannot and will not stand for any behavior that could intimidate voters from participating in our democracy. Our country stands for freedom, liberty, and democracy, and these scare tactics have no place in our state. It’s clear that those running scared will try anything in the closing weeks of the election. There are no excuses for this behavior. We are committed to making sure every Floridian can vote and every vote is counted.

BREAKING: Armed men dressed as security guards claiming to be with the Trump campaign showed up today at the downtown St. Pete early voting location today, according to @VotePinellas Supervisor of Elections Julie Marcus.@WFLA #BattlegroundFloridahttps://t.co/1200uGwzHP

*Just yesterday* I happened to interview Pinellas Sheriff Bob Gualtieri about this exact type of voter intimidation, and his plan to thwart it.@WFLA #BattlegroundFlorida #Sayfie https://t.co/vgA7ENyfZe

“I just don’t want to get too deep into the specifics because we’re trying to balance it,” Gualtieri told me. “But I’ll say it’s a combination of uniformed personnel who will be in the area and also we’re gonna use some undercover personnel just to monitor the situation.”