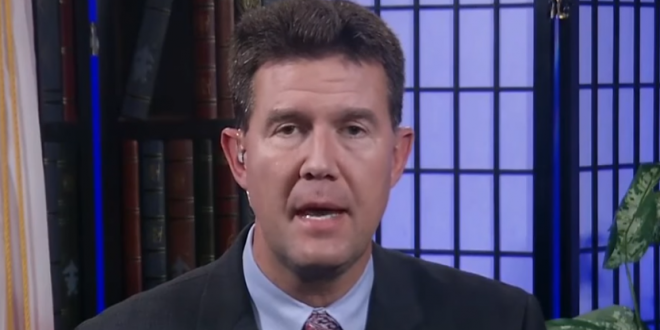 Alabama Sued Over “So Help Me God” Voter Oath

The Freedom From Religion Foundation filed a lawsuit against Alabama’s Secretary of State John H. Merrill [photo] claiming that the state’s voter registration form is unconstitutional because it includes an oath that says “so help me God.”

“Alabama is the only state in the country that requires voters to register on a form mandating they swear ‘so help me God,’ without allowing any option of a secular affirmation,” the Wisconsin-based atheist group said in a statement announcing it filed a lawsuit in the U.S. District Court for the Northern District of Alabama, Southern Division this week.

“The Alabama secretary of state excludes Alabama citizens from being able to vote if they are unable to swear a religious oath,” states the lawsuit, filed on behalf of four Alabama residents “who have encountered and objected to this religious test when trying to register to vote.”

Merrill last appeared on JMG when he attempted to flame Twitter critics over the law requiring notarized affidavits to accompany an absentee ballot. That law requires voters to have access to a computer or photocopier, and a printer. He told one man that if he’s too stupid to figure it out, he should probably plan on “voting in person.” Prior to that, Merrill was mentioned here during his failed Senate bid when he blamed mass shootings on the media. Before that, he appeared here when he blamed “homosexual activities” for the dearth of wholesome family entertainment like Gunsmoke, which went off the air 45 years ago. When asked for an example of those homosexual activities, he cited women’s soccer.

Previous Meadows: Next 48 Hours “Will Be Critical” For Trump
Next Three GOP Reps Flew Delta After Exposure To Trump