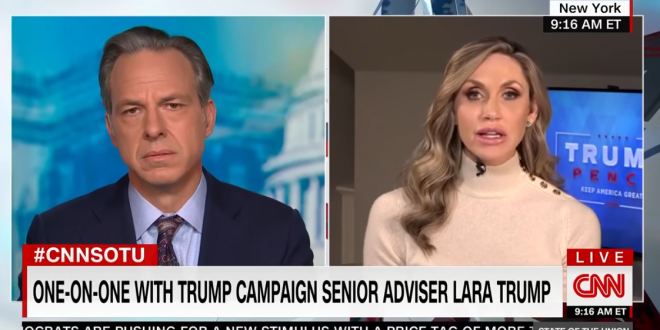 Lara Trump on Sunday denied mocking Democratic presidential nominee Joe Biden’s speech, and instead suggested that the former vice president may be experiencing a cognitive decline. She said on Sunday that she “had absolutely no idea” that Biden had ever struggled with a stutter and then suggested that his way of speaking was indicative of cognitive decline. Tapper quickly noted that many people had diagnosed her father-in-law from afar and said that she had no standing to do the same to Biden.

In the same interview, Trump made light of the president’s criticism Gov. Gretchen Whitmer. The crowd at a Trump rally in Michigan late Saturday chanted the phrase “Lock her up!,” which has been heard at his rallies since 2016, when he ran against Hillary Clinton. “Lock ’em all up,” the president responded on Saturday. “He wasn’t doing anything to provoke people to threaten this woman at all,” referring to the president. “He was having fun at a Trump rally.”

As you’ll see in the final clip below, Tapper finally abruptly ended the interview when he couldn’t get Lara Trump to stop screeching over his questions.

“How do you think that makes little kids with stutters feel when they see you make a comment like that?”

Lara said she didn’t know Joe had a stutter.
Tapper was like, “not today, Satan.”#SundayThoughts #sundaymorning pic.twitter.com/b5x9oXIFqQ

Lara Yunaska Trump, who went to culinary school and was a low level producer at Inside Edition married to the Trump spawn most likely to chase a balloon in oncoming traffic, is now an expert on cognitive decline. Cute. #LaraTrump. https://t.co/snHQaDXVqx

Let us all be grateful for Claudia Conway who sidelined her evil genius mom and forced the Trump campaign to rely on Lara Trump’s off-brand Velveeta version of Trumpism.

Lara Trump’s defense of Trump repeatedly ginning up “lock her up!” chants direct toward Gretchen Whitmer is pure whataboutism: “Well gosh, I’d like to show people my social media & the threats against me, the threats against my children… [Trump] was having fun at a Trump rally” pic.twitter.com/YZIhIUt5cA

Basically, Lara is showing what a hard time Trump people have speaking to people outside their Trump bubbles. So much yelling. It’s too early for this.