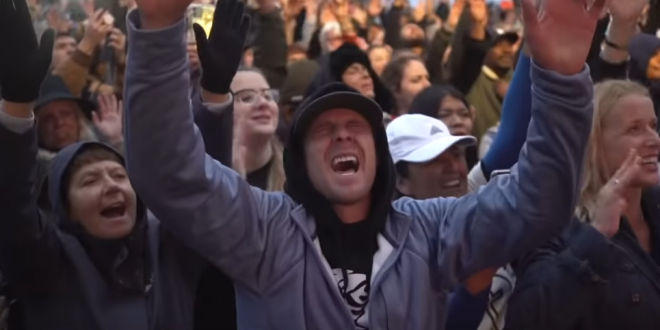 Tens of thousands of Christians from all over the country assembled on Sunday evening to worship on the National Mall to intercede for the nation amid an ongoing pandemic and tense election season. As part of worship artist Sean Feucht’s multi-city nationwide tour called Let Us Worship, the Sunday event was the 45th place the California-based musician had led worship.

Feucht explained from the stage that the Let Us Worship movement was in part born out of alarm and distress over California Governor Gavin Newsom’s policies related to the shutdown of churches. Among the guests who showed up and spoke and prayed from the stage was Sen. Josh Hawley. He had just come from the U.S. Capitol, where the Senate had just voted to advance the nomination of Amy Coney Barrett.

Washington, D.C., was the 45th place of Sean Feucht’s Let Us Worship tour.https://t.co/rxNJjA7Af9

More than 40,000 Christians gathered in Washington DC this weekend to celebrate the Kingship of Christ! #LetUsWorship @seanfeucht @HawleyMO pic.twitter.com/wAn2EK7GT6

Taking Communion on the National Mall in Washington DC with Charles Stock, Sean Feucht, Lou Engle… acknowledging our total dependency on the Lord Jesus Christ with a crowd of worshippers, and asking Him to heal our nation. pic.twitter.com/zWDChuoJfV