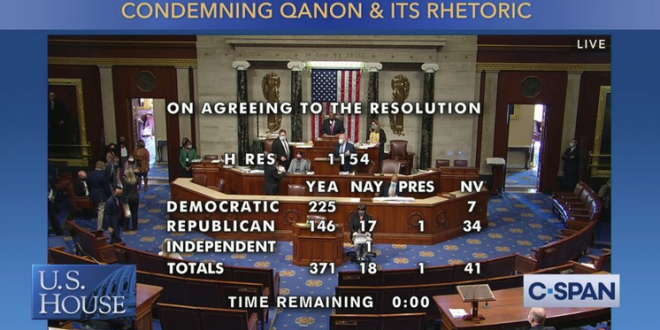 The House overwhelmingly approved a resolution condemning QAnon, the fringe movement that promotes wide-ranging conspiracies about the U.S. government and yet has enjoyed a rising tide inside conservative politics in part because of tacit encouragement from President Trump.

The measure passed 371-18, with one GOP member voting present. QAnon is a “collective delusion, said House Rules Chairman Jim McGovern, D-Mass., “We all must call it what it is: a sick cult.”

The resolution was sponsored by Rep. Tom Malinowski, a Democrat running for reelection in a competitive New Jersey race, who has been repeatedly and inaccurately accused by the House Republicans’ official campaign operation of lobbying on behalf of sexual predators.

Malinowski says that he and his family have been getting death threats from QAnon followers due to the GOP’s ad campaign.