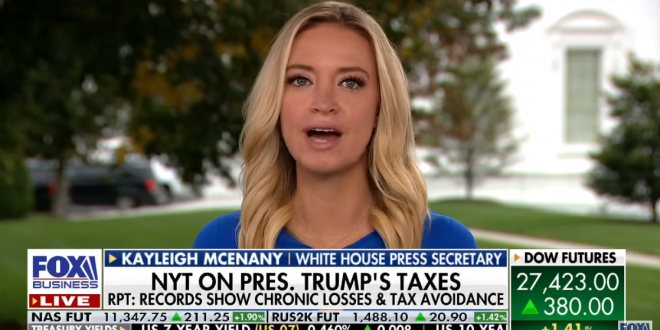 WH Backs Call For Probe Into “Leak” Of Trump’s Taxes

During an appearance on Fox News, McEnany said Trump has not been pushing for the criminal probe that Brady is seeking, but she said, “That is a fair investigation to have.” “It’s an important investigation,” she later added.

In a statement Monday night, Brady, the top Republican on the House Ways and Means Committee, said he was troubled by the possibility “that a felony crime was committed by releasing the private tax return information of an individual — in this case the President’s.”

Trump has called the report on his taxes “fake news” and “illegally obtained.” Both claims cannot be simultaneously true.

After appearing on Fox TV this morning, @PressSec “declined to take questions from reporters gathered on Pebble Beach in anticipation of a gaggle.”

So, has time on taxpayer dime for Fox, but none for the press.