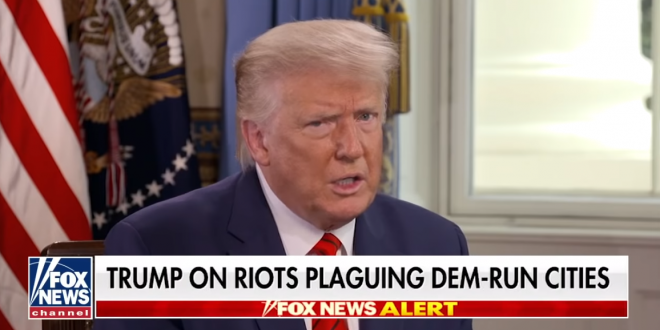 In an interview with Fox News host Laura Ingraham, Trump claimed that “we had somebody get on a plane from a certain city this weekend, and in the plane it was almost completely loaded with thugs, wearing these dark uniforms, black uniforms, with gear and this and that.”

The claim about a flight matches a viral Facebook post from June 1 that falsely claimed, “At least a dozen males got off the plane in Boise from Seattle, dressed head to toe in black.” The post, by an Emmett, Idaho man, warned residents to “Be ready for attacks downtown and residential areas,” and claimed one passenger had “a tattoo that said Antifa America on his arm.”

That post was shared over 3,000 times on Facebook, and other pages from Idaho quickly added their own spin to it, like the Idaho branch of the far-right militia group 3 Percenters. One post claimed that “Antifa has sent a plane load of their people” and that the Payette County Sheriff’s Office confirmed it. Within days, that version of the rumor picked up enough steam in Idaho Facebook groups that the Payette County Sheriff’s Office had to release a statement insisting that the viral rumor was “false information.”