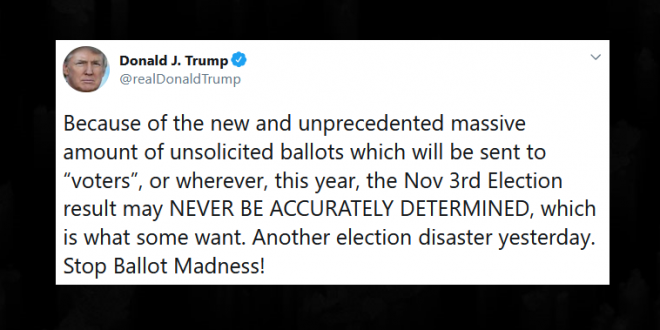 Trump: We May Never Know Who Really Won Election

President Donald Trump baselessly questioned the validity of the November 3rd general election in a Thursday morning tweet that criticized what he called “unsolicited ballots,” and cited the efforts of the pro-Trump political group True the Vote.

The two-part tweet came shortly after a Fox & Friends segment aired an interview with Catherine Engelbrecht, founder, and president of the True the Vote whose mission is to “restore the confidence in our election process.”

Englebrecht told Fox & Friends host Ainsley Earhardt that she sees mail-in voting as “engineered chaos” and explained her True the Vote effort “is part of a plan to open up legal battlefields nationwide.”

Because of the new and unprecedented massive amount of unsolicited ballots which will be sent to “voters”, or wherever, this year, the Nov 3rd Election result may NEVER BE ACCURATELY DETERMINED, which is what some want. Another election disaster yesterday. Stop Ballot Madness! https://t.co/3SMAk9TC1a

The big Unsolicited Ballot States should give it up NOW, before it is too late, and ask people to go to the Polling Booths and, like always before, VOTE. Otherwise, MAYHEM!!! Solicited Ballots (absentee) are OK. @foxandfriends

Previous Trump: “My People Got Outplayed” On Pandemic PR
Next DHS To Probe Report Of Medical Abuse At ICE Facility