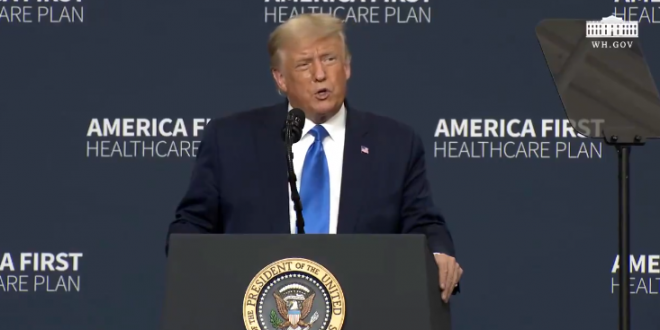 More than three-and-a-half years into his presidency and 40 days from an election, President Donald Trump on Thursday launched what aides termed a “vision” for health care heavy on unfulfilled aspirations.

“It is affirmed, signed and done, so we can put that to rest,” Trump said after signing an executive order covering a range of issues, including protecting people with preexisting medical conditions from insurance discrimination. But that right is already guaranteed in the Obama-era health law his administration is asking the Supreme Court to overturn.

House Speaker Nancy Pelosi dismissively said Trump’s “bogus executive order on pre-existing conditions isn’t worth the paper it’s signed on.” Democrats are betting heavily that they have the edge on health care this election season.

Pres Trump: I am signing the first-ever executive order to affirm that it is the “official policy of the United States Government to protect patients with pre-existing conditions.”

Trump brags about the lawsuit he’s a part of that would get rid of protections for preexisting conditions.

But Trump claims, “if we win, we will have a better and less expensive plan that will always protect individuals with preexisting conditions.”

Facts:
– Obamacare created the protections for pre-existing conditions
– Trump has backed GOP bills to weaken them
– Trump admin has argued in court that the protections are unconstitutional
– Admin is now trying to get Obamacare killed in court
– An order can’t replace law