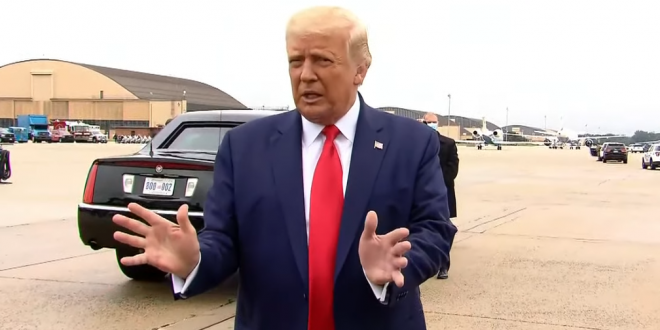 As he headed to Kenosha, Wis., on Tuesday, Trump derided the city’s mayor as “very stupid” for sympathizing with protesters and said he believed his trip highlighting the work of law enforcement would be good for healing racial tensions.

Trump also held open the possibility that he would meet with the family of Jacob Blake, the 29-year-old Black man whose shooting in the back by Kenosha police has sparked protests and unrest. The White House had previously said such a meeting is not in the works, and Blake’s father has said he is not interested in speaking to Trump.

So basically Black people boarded a plane headed for DC and one of Trump’s friends felt uncomfortable https://t.co/OfhrVqWmxa

“Portland has been like this — I read an article today — for 50 years this has been going on.” — he’s out of his mind pic.twitter.com/UUAXLZbLTv

strange that i didn’t hear about this on fox & friends, where i get my morning dose of news https://t.co/gdOJEEtAYX

JUST IN: President Trump blasts Kenosha Mayor before visit: “These radical anarchists were trying to get into the Mayor’s house, and lots of bad things were happening to this poor, foolish, very stupid mayor… He still sticks up for them because he’s a fool.” pic.twitter.com/yaEJX2Ec12

“That version of the rumor picked up enough steam in Idaho Facebook groups that the Payette County Sheriff’s Office had to release a statement insisting that the viral rumor was ‘false information.'” https://t.co/oRwESx7nul