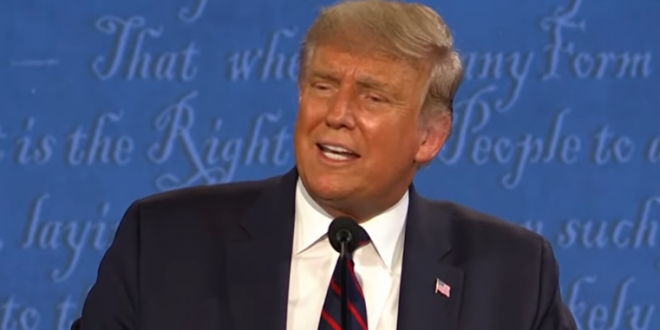 Trump Refuses To Condemn White Supremacists, Proud Boys Celebrate After He Says They Should “Stand By”

Members of the Proud Boys, a far-right group that has endorsed violence, celebrated on Tuesday night after President Trump mentioned them during the first presidential debate.

Asked whether he condemned white supremacists and military groups, Mr. Trump demurred and then said, “Proud Boys — stand back and stand by.” Within minutes, members of the group were posting in private social media channels, calling the president’s comments “historic.”

In one channel dedicated to the Proud Boys on Telegram, a private messaging app, group members called the president’s comment a tacit endorsement of their violent tactics. In another message, a member commented that the group was already seeing a spike in “new recruits.”

Trump was asked by debate moderator Chris Wallace to disavow white supremacy during a part of the debate focused on race. Wallace asked whether Trump would urge white supremacist groups that inflamed violence at nationwide protests to “stand down.”

Trump said to “give me a name” when asked to denounce a specific group, and former Vice President Joe Biden called out the Proud Boys. But Trump did not denounce any far-right or white supremacist groups, and he then pivoted to talk about antifa.

“Proud Boys, stand back and stand by, but I’ll tell you what, somebody’s got to do something about antifa and the left, because this is not a right-wing problem. This is a left-wing problem,” Trump said.

The most remarkable thing about Trump’s “stand by” statement to the “Proud Boys,” a violent, misogynistic far-right neo-fascist group, was that it was an *instruction.* He was asked to condemn them. Instead, he spoke to them with his orders. That should shock all of us.

The Proud Boys are ecstatic tonight about getting mentioned in the debate tonight.

“Trump basically said to go fuck them up! this makes me so happy,” writes one prominent Proud Boy. pic.twitter.com/hYA7yQVAOn

Chris Wallace: “Are you willing, tonight, to condemn white supremacists and militia groups and to say that they need to stand down…”

Trump: “Proud Boys, stand back and stand by! But I’ll tell you what, somebody’s got to do something about antifa and the left.” pic.twitter.com/4vrPocKzcu

The Proud Boys on Telegram have now posted an image with its logo and Trump’s remark. https://t.co/xSySGrohcm pic.twitter.com/UAJFsKCsbX

Sen. Markey after debate: “Donald Trump won’t condemn white supremacists because he is one” https://t.co/JSMnuR0yYL pic.twitter.com/h2DpXDcbMp

“The commander-in-chief refused to condemn white supremacy on the global stage,” says @VanJones68 about Pres. Trump’s debate performance. “He gave a wink and a nod to a racist, Nazi, murderous organization that is now celebrating online.” #Debates2020   pic.twitter.com/5IYiJhb7i0

President Trump refused to condemn white supremacists and militia groups during the debate, instead telling the Proud Boys — a group labeled by the SPLC as a hate group — to “stand back and stand by.” #Debates2020https://t.co/cXK3cWdFFp

Proud Boys members used Trump’s “stand back & stand by” comments to create a fresh logo and messaging campaign. Minutes after the debate, the group’s main account on Parler tweeted a video of Trump’s statement with: “YES SIR, PROUD BOYS STANDING BY.” https://t.co/CWoWH3A0SK

Tonight, @POTUS name-checked them at the debate & they could barely contain their excitement.
Our experts share some of their reactions: https://t.co/YXf9K0VxKX