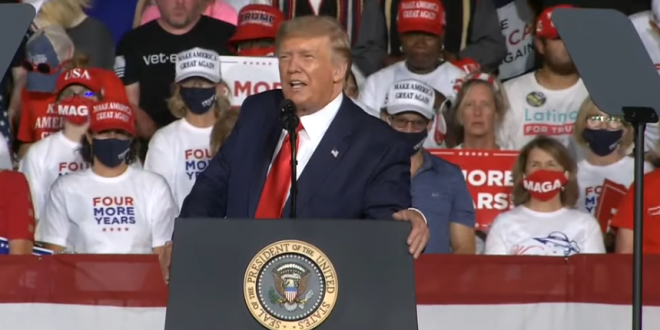 Trump Orders Cultists To Act As Poll Monitors: Watch All The “Thieving And Stealing And Robbing That They Do”

It used to be unthinkable that a U.S. president would effectively encourage voter intimidation at the polls—but no longer. In an extraordinary call to action at his North Carolina rally Tuesday, President Donald Trump urged his supporters to gather at polling places in November and take it upon themselves to monitor the election.

The campaign planted some people in masks in the stands behind Trump, but few in the main crowd were wearing them.

Trump begins his rally in Winston-Salem, North Carolina by bragging about how packed the crowd is during a pandemic pic.twitter.com/JIkwnThP84

“We are going to be appointing very pro-crime judges” — Trump #wut pic.twitter.com/Ne4U0kYANT

Trump makes stuff up: “Mexico is paying for the wall, just so you understand. They don’t say that. They never say it. But we’re gonna charge a small fee at the border. You know, the toll booths.” pic.twitter.com/Vs9i2fQHiG

Trump urges his supporters to be “poll watchers” on Election Day.

“Watch all the stealing and robbing they do. This is important.” pic.twitter.com/xmI5w9xUYX