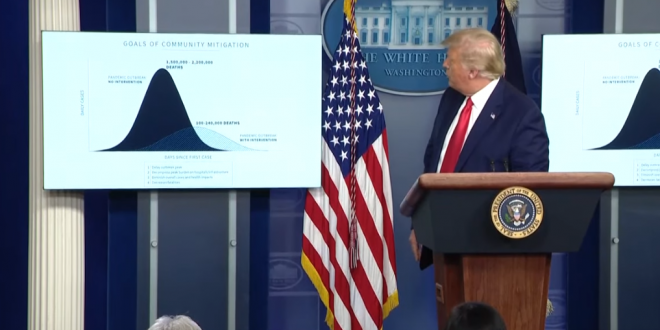 Trump On COVID Death Toll: If You Take Out The Blue States, We’re Doing Better Than Anybody In The World

But Trump then began to segregate out states by their 2016 presidential vote or governor’s party affiliation, not-so-subtly criticizing so-called Democratic states and suggesting the higher number of death rates here were the main cause of the country’s elevated fatality levels and were the only thing keeping the

“The blue states had tremendous death rates,” Trump, the President of the United States, said “If you take the blue states deaths out, we are at a level I don’t think anybody in the world would be at.”

The deaths in the blue states don’t count is one probably the sickest and most honest belief I’ve heard Trump express.

Trump says that if you take out “blue states” from the death statistics, they’re much better. (He’s previously talked about removing New York in particular, which was itself ridiculous.)

Praising his own virus response as deaths near 200,000, Trump says, “if you take the blue states out, we’re at a level I don’t think anybody in the world would be at.” pic.twitter.com/ezAU5IJIcQ

Trump ludicrously claims that public health measures to slow the spread of coronavirus in blue states are “hurting people far more than the disease itself.” It’s like he’s trying to kill people. pic.twitter.com/uziJ8fIRw8

“Other than that, Mrs Lincoln very strongly enjoyed the play” https://t.co/5BgaRTrjfU