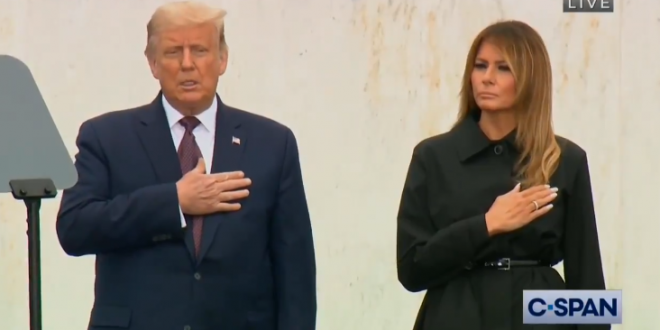 Trump Omits “Under God” In Pledge At 9/11 Event

Last month Glorious Leader falsely claimed Democrats had omitted “under God” from the Pledge of Allegiance during the Democratic National Convention. He doubled and tripled down on those claims even after multiple outlets provided video from each night of the convention.

Which brings us to today’s 9/11 commemoration event, where Trump made a halfhearted attempt to mumble along to the pledge and appeared to himself skip “under God.” Trump’s third wife, a naturalized citizen, made no attempt to recite the pledge at all.

Less than a few hours since Trump refused to say “Under God” when reciting the Pledge of Allegiance and already half the fish in Indiana are gay. How can us people of faith continue to stand by this man? We got our judges, but now we’re also getting gay fish. We’ve been forsaken.

From this tape, one gets the impression that Trump has forgotten half the words of the pledge of allegiance, and Melania never bothered to learn them https://t.co/LL1AKS4KAO

Today Trump refused to say “under God” during the Pledge of Allegiance. He’s claiming:
1) Melania told him it’s “under Bob”
2) Only losers say “under God”
3) As with Jeffrey Epstein and Michael Cohen, Trump “doesn’t know” God
4) He was having enough trouble with the stairs

Can Trump say “under God”? He doesn’t seem to know the Pledge https://t.co/YZiHJA0H1n

Why does Trump refuse to say “under God” during the Pledge of Allegiance? Wasn’t he rage tweeting about this 3 Sundays ago from the golf course? pic.twitter.com/RUhf48gXCI

Previous Roger Stone: Trump Should Seize Power If He Loses
Next 9/11 Military Flyover Of NYC Canceled After Outcry