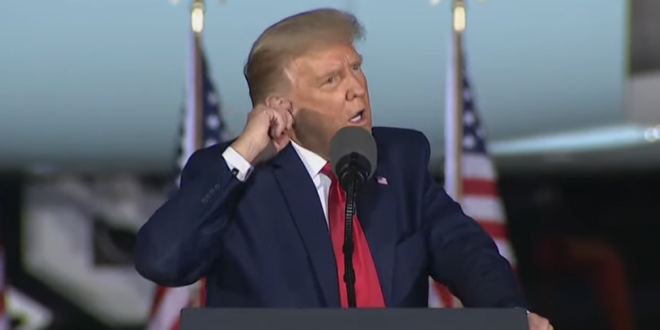 Trump ridiculously invoked the former British Prime Minister Winston Churchill and the President Franklin Delano Roosevelt at a Thursday night rally, claiming that like them, he had tried hard to calm public panic in a dark hour.

It was a historically illiterate gambit, since unlike Trump in the pandemic, both statesmen leveled with their people about grave national crises.

“As the British government advised the British people in the face of World War II, ‘Keep calm and carry on.’ That’s what I did,” Trump told a crowd of supporters in Freeland, Mich.

While some critics took Trump to task for comparing his decision to misinform the public about a virus that has now killed at least 188,000 Americans to the British government’s battle with the Nazis, others noted that he was the latest to fall for a common myth.

Those uber-popular “Keep Calm and Carry On” posters? They were never actually used during World War II. In fact, critics noted, that message contrasted noticeably with many of Winston Churchill’s famed speeches, which urged Britons to fight to the death — not to carry on as if life were normal.

Oh man. Trump: “As the British government advised the British people in the face of World War II, keep calm and carry on. That’s what I did.”

Churchill was famously blunt with the British people about how bad things could get.

“Keep calm and carry on”: Trump compared himself to Brits in the Blitz. But that phrase was never used in WWII. https://t.co/TnAtPVmDms

Churchill according to Donald Trump:

“There are no German warplanes overhead. Those are not bombs dropping. Do not go to bomb shelters! Gather on the streets. Do NOT wear a helmet! And can someone please turn off the radars, we don’t want to count the enemy planes!”

What Churchill actually said: “We are in the preliminary stage of one of the greatest battles in history… I have nothing to offer but blood, toil, tears and sweat. We have before us an ordeal of the most grievous kind… many, many long months of struggle and of suffering.” https://t.co/nR7xrDPu6X