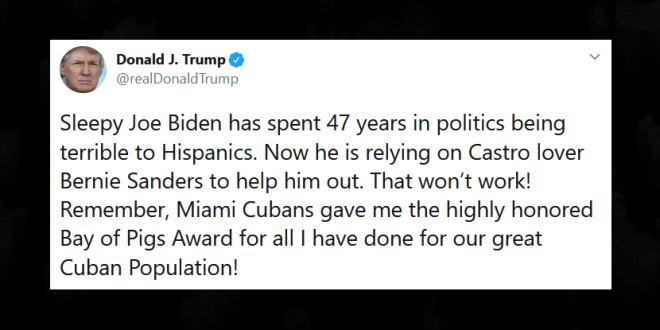 Trump Invents Another Nonexistent Award For Himself

It appears President Trump is pretty confident about winning the votes of Cubans in Florida after bragging about being the recipient of the Bay of Pigs award.

On Sunday, Bay of Pigs began trending on Twitter after Trump tweeted about the recognition he received for helping the Cuban population. However, the award in question doesn’t exist.

The Bay of Pigs was a 1961 failed landing invasion by Cuban exiles who were against Fidel Castro’s Cuban Revolution. While an award does not exist, the Miami Herald reported the Bay of Pigs Veterans Association endorsed Trump during his 2016 presidential run.

Sleepy Joe Biden has spent 47 years in politics being terrible to Hispanics. Now he is relying on Castro lover Bernie Sanders to help him out. That won’t work! Remember, Miami Cubans gave me the highly honored Bay of Pigs Award for all I have done for our great Cuban Population!

For those confused by Trump’s claim he got the “highly honored Bay of Pigs Award”:

He got an endorsement in 2016 from the Bay of Pigs Veterans Association. It’s not an award. He has a long history of turning endorsements and other non-awards into awards.

Donald Trump came to Miami in 2000 while pretending to run for President only to tell Bay of Pigs veterans her would take a hard line on Cuba **WHILE SECRETLY TRYING TO DO BUSINESS WITH FIDEL CASTRO IN VIOLATION OF U. S. SANCTIONS** but he’s beloved by @MiamiGOP. pic.twitter.com/lBiQmqObYa

There it is: Trump repeats his lie that he was "given Man of the Year Award by somebody" in Michigan. https://t.co/lupgizgaeJ