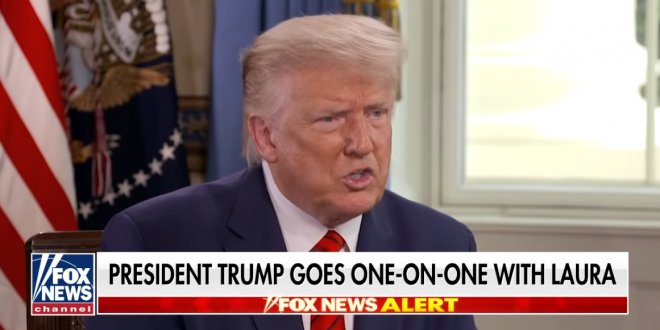 President Donald Trump again pushed a baseless claim about “tremendous cheating” that cost him the popular vote in a segment of his Fox News interview with Laura Ingraham that aired Tuesday night.

Trump talked up the enthusiasm among his own supporters when Ingraham asked, “Do you think you could win the popular vote?”

“People say it’s important for you to win it, not because you wouldn’t be president, but because it sends a message to the country,” she said. “I think I could win,” Trump said, before going on to claim, “I think I did win the popular vote, in a true sense.”

Laura Ingraham: “Do you think you can win the popular vote?”

Trump on why Hollywood celebrities will vote for him: “They are greedy people. They don’t want to lose their wealth. So they’ll talk one way, and vote another way.” pic.twitter.com/DgapmbSGOb

Part two of Trump’s never-ending interview with Laura Ingraham begins with Trump calling on Bill Barr to prosecute the likes of Obama and Biden pic.twitter.com/O9Vjw2YsZz

Previous Lawsuit Seeks To Block Kanye West From Arizona Ballot
Next 81 US Nobel Prize Laureates Endorse Biden: We Need Leaders Who Appreciate The Value Of Science In Policy