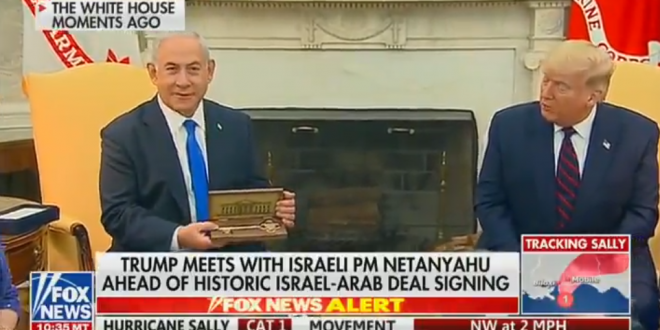 Trump Gives Netanyahu “The Key To The White House”

President Trump will preside over a White House signing ceremony Tuesday in which Israel will establish formal ties with two Arab states, the United Arab Emirates and Bahrain, in what Trump calls the flowering of his Middle East peace plan. The agreement, called the Abraham Accord in honor of the three Abrahamic religions rooted in what is now Israel and surrounding lands.

Israeli Prime Minister Benjamin Netanyahu will attend, but the UAE and Bahrain chose to send their foreign ministers rather than heads of state or government. That, along with precautions against the spread of the coronavirus, will deny Trump the chance to fully re-create the historic group handshakes that were the symbolic capstone of past White House peace ceremonies.

From inside the Oval Office.

Trump gave Netanyahu a “key to the White House,” and Netanyahu said Trump has “the key to the hearts of the people of Israel” pic.twitter.com/V1XY5YE9e2

Israeli PM Netanyahu with “key to the White House” presented to him by President Trump and Melania Trump pic.twitter.com/uj3TMuvn4F

If you were the person inside the WH complex who was tasked with either going online or in person to purchase some novelty key for a made up award to Bibi, hit me up. I’d like to tell your story https://t.co/UxZVlfRUiw

Previous POLL: International Regard For US Craters Under Trump
Next World Trade Org Rules Trump’s Tariffs On China Illegal