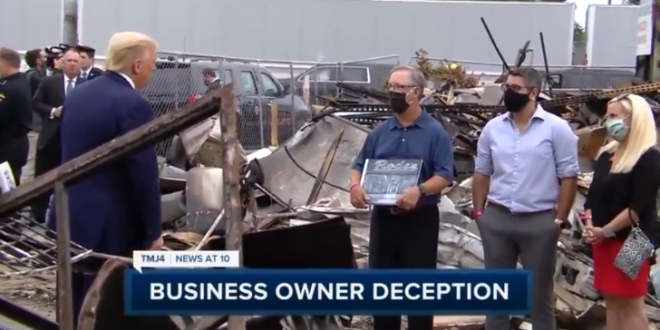 A Kenosha business owner is accusing President Donald Trump of using his destroyed store for political gain. Tom Gram’s century-old camera shop burned to the ground a week ago during the unrest in Uptown Kenosha.

Gram said he declined President Trump’s request to be a part of his tour of damage Tuesday in Kenosha. Instead, a former owner of the shop was invited and he praised the president’s efforts.

“I think everything he does turns into a circus and I just didn’t want to be involved in it,” Gram said. To Gram’s surprise, he watched on TV as the president showed up with the store’s former owner and President Trump made it seem like the store was still his.

The owner of an old Kenosha camera shop refused to pose with Trump, saying Trump was using him and his shop for political gain. So Trump had the former owner of the shop pretend to be the current owner for a photo op. https://t.co/VYm8ij2tfL