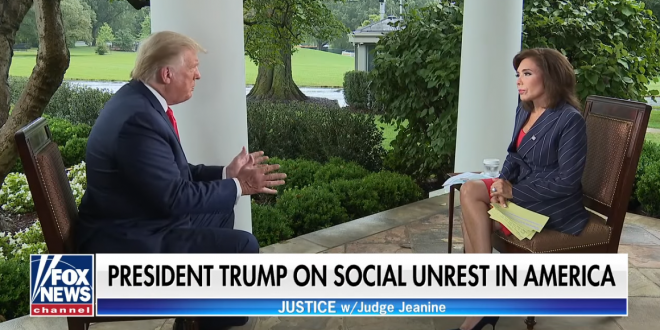 Discussing the recent police killing of a self-described anti-fascist suspected of fatally shooting a far-right activist in Portland, Oregon, President Donald Trump openly endorsed extrajudicial executions in a Fox News interview Saturday, declaring that “there has to be retribution.”

“I put out, ‘When are you going to go get him?’ And the U.S. Marshals went in to get him,” the president told Fox News host Jeanine Pirro, referring to Michael Forest Reinoehl. “This guy was a violent criminal, and the U.S. Marshals killed him. And I’ll tell you something—that’s the way it has to be. There has to be retribution.”

A witness alleges that “Reinoehl was clutching a cellphone and eating a gummy worm as he walked to his car. That’s when officers opened fire without first announcing themselves or trying to arrest him.” The witness account contradicts the law enforcement narrative that Reinoehl “produced a firearm” when officers attempted to arrest him.

Trump on a purported antifa sympathizer who allegedly killed someone in Portland being killed by federal forces: “This guy was a violent criminal, and the US Marshals killed him. And I’ll tell you something — that’s the way it has to be. There has to be retribution.” pic.twitter.com/WfIP9b37sA

Trump Applauds ‘Retribution’ of U.S. Marshals Killing Portland Shooting Suspect: ‘That’s The Way It Has To Be’ https://t.co/nPY4Ic2D5M

Trump described the killing of an antifa-linked suspect by US Marshals as ‘retribution’ https://t.co/q93qjKjSTA

Previous Trump At Super-Spreader Rally: “Now I Can Be Vicious”
Next Christian Site: When Witchcraft Gives You The Flu