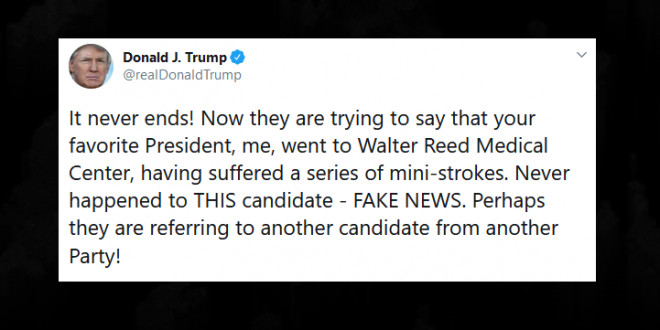 Trump Denies “Mini-Strokes” Sent Him To The Hospital

Trump’s very upset that this story is dominating Twitter:

Days before Thanksgiving 2019, President Donald Trump made an unscheduled visit to Walter Reed hospital, a trip the White House later dismissed as nothing more than a “quick exam and labs” as part of his annual physical. Even then, the explanation was fishy. Presidents don’t make trips that members of the press don’t know about almost ever — unless they are flying into a war zone and their safety is at risk.

The only information we have about Trump’s health, prior to the annual physical he is subject to in the White House, comes in the form of a letter that his personal physician at the time says was entirely dictated by Trump. Records on Trump’s past medical history have been confiscated by Trump associates. Trump’s strategic decision to put a premium on health and mental acuity means that it’s fair game to want answers about his own standing on those issues.

It never ends! Now they are trying to say that your favorite President, me, went to Walter Reed Medical Center, having suffered a series of mini-strokes. Never happened to THIS candidate – FAKE NEWS. Perhaps they are referring to another candidate from another Party!

Because you lie about everything, from the most trivial to the most consequential, we don’t believe you. Ever.

Did you have a stroke, @realDonaldTrump? I hope you stay well because I want you to spend a long time in prison.

Trump is claiming an airplane full of “thugs” in “black uniforms” is out “to do big damage.”

Is he
A. physically unwell (stroke)?
B. nuts (full-scale paranoia)?

Either way, this is a serious problem. He still controls the nuclear codes.

The new book that Trump is alluding to does not in fact say that Trump suffered from “mini-strokes.” https://t.co/M45B9TMnKd

Sounds like Trump just admitted to a series of “mini-strokes”, don’t it?https://t.co/v5sVU8pbSh