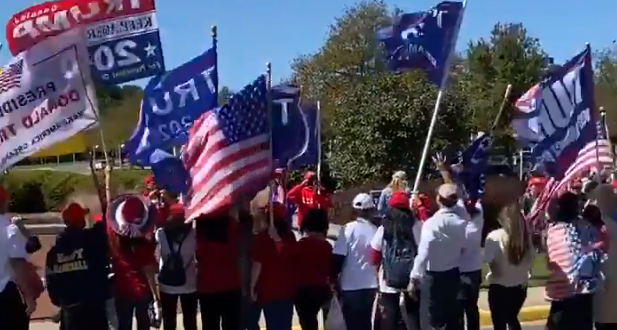 A group of Trump supporters waving campaign flags disrupted the second day of early voting in Fairfax, Va., on Saturday, chanting “four more years” as voters entered a polling location and, at one point, forming a line that voters had to walk around outside the site.

County election officials eventually were forced to open up a larger portion of the Fairfax County Government Center to allow voters to wait inside away from the Trump enthusiasts.

Election officials said that the group stayed about 100 feet from the entrance to the building and, contrary to posts on social media, were not directly blocking access to the building. But they acknowledged that some voters and polling staff members felt intimidated by what some saw as protesters.

As you can see here they are blocking the entrance to the voting site. #EarlyVoting #VA #FairFax pic.twitter.com/KJ6fbLdP3G

Virginia election officials said some people felt “intimidated” when Trump supporters descended on a polling place in the state today, chanting “four more years,” as early voting continued for a second day, per the NYT https://t.co/LwgV2YwfYc

People seeking to cast their ballots early had the entrance to their polling place blocked by a group of chanting maskless MAGA demonstrators.https://t.co/XiiuYXEe6v