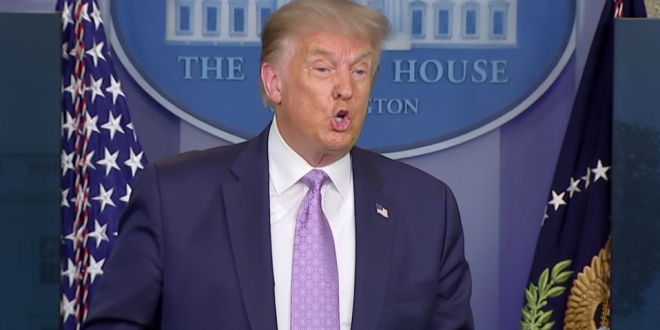 CDC Director Dr. Robert Redfield told lawmakers at a Senate hearing he expects vaccinations to begin in November or December, but in limited quantities with those most in need getting the first doses, such as health-care workers. He said it will take about “six to nine months” to get the entire American public vaccinated. Trump said Redfield was mistaken when he said the vaccine wouldn’t be widely available to the general public until next summer or early fall.

“I think he made a mistake when he said that. It’s just incorrect information and I called him and he didn’t tell me that and I think he got the message maybe confused, maybe it was stated incorrectly,” Trump said. “We’re ready to go immediately as the vaccine is announced and it could be announced in October, it could be announced a little bit after October but once we go we’re ready.”

Trump says he spoke with Redfield on this: “I believe that if you ask him he’d probably say that he didn’t understand the question.” Trump says “there are a lot of problems with masks,” contradicting public health experts. Says Redfield made a “mistake” https://t.co/KBKjDbCFsb

Question: Why should the American people trust you on the pandemic when you’re contradicting the head of CDC
Trump: Because of the great job we’ve done pic.twitter.com/SwMAmshK2t

‘I think there’s a lot of problems with masks’ — Trump continues to throw doubt on the efficacy of masks and contradicted the CDC director’s argument for mask usage earlier today pic.twitter.com/VqxnyNS5lg

“Number 1 it’s not more effective than a vaccine. I called him about. … If you asked him, he would probably say that he didn’t understand the question” pic.twitter.com/WgoAhfpmDy

NEW: Pres. Trump disputes earlier comments by CDC Dir. Redfield that any possible vaccine would not likely be widely available until next spring or summer.

“I think he made a mistake when he said that…When he said it, I believe he was confused.” https://t.co/8U0pt0jmNu pic.twitter.com/bkLSEaW8yv

“When I called up Robert [Redfield] today, I said to him, ‘what’s with the masks?’ He said, ‘I think I answered that question incorrectly.'” — Trump on the CDC director’s congressional testimony pic.twitter.com/S1FpJRmsVO

BREAKING: President Trump directly contradicted the CDC director on when the coronavirus vaccine will be available to the general public, saying Dr. Robert Redfield was “confused” and that a vaccine would be ready “immediately” after being approved https://t.co/gpXJbAdcub

Previous Biden: I Trust Vaccines But I Don’t Trust Trump [VIDEO]
Next Trump On COVID Death Toll: If You Take Out The Blue States, We’re Doing Better Than Anybody In The World