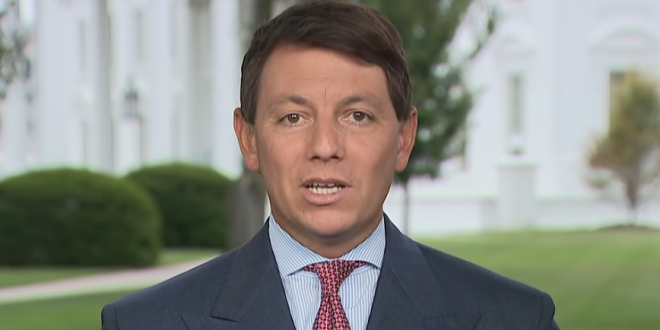 Trump Campaign Spox Defends Kenosha Killer: If You Don’t Let The Cops Do Their Job, This Is What Happens

“It does make sense just logically, if you don’t allow police to do their job, then the American people have to defend themselves some way,” the Trump campaign spokesperson said.

When a visibly shocked Berman pointed out that Gidley had just defended vigilantism, the campaign aide retorted that he “did no such thing.” Gidley dodged when Berman pressed him to say definitively that both he and Trump oppose vigilantism.

President’s Press Secretary again defending accused double-murderer Kyle Rittenhouse, says it’s the logical consequence of Black Lives Matter movement. “If you don’t allow police to do their job then the American people have to defend themselves some way.” pic.twitter.com/onxmeMtaOG

“Does mispronouncing words qualify? I know Yosemite is not “yo-semite.” You can count instances where the president has mispronounced words. Is that your standard for assigning mental acuity” — @jimsciutto to Hogan Gidley pic.twitter.com/BNicNBK5aZ

GIDLEY: No one has more strength than Donald Trump. No one can keep up with him

SCIUTTO: How many times on the golf course, Hogan? Come on pic.twitter.com/UQkMS5AEhE

“It does raise a pretty good question, in that, how do all these people get into these communities? Who pays for their flights? … it’s a very coordinated effort” — Hogan Gidley defends Trump’s lunatic comments about caravans of antifa boarding planes and flying to protests pic.twitter.com/4xj2oSSRJS