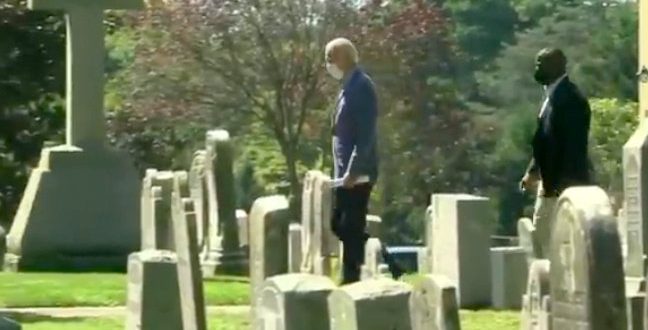 A Trump staffer has come under fire for mocking Joe Biden after the former vice president visited the graves of late family members in Delaware on Sunday.

Francis Brennan, Mr Trump’s campaign director of strategic response, appeared to criticise Mr Biden, 77, for not speaking to the media while walking through the cemetery at Brandywine church in Wilmington, where his late son Beau, first wife Neilia, and daughter Naomi are buried.

Beau Biden, an Iraq veteran, and former Delaware attorney general, died from brain cancer in 2015 aged 46. Neilia and Naomi Biden were killed in a car accident 1972.

It’s a cemetery. Where his son is buried. Are you human? https://t.co/MSEIPlUxUq

Here’s Trump’s “director of strategic response” trying to trash Biden for not talking to reporters…while he was visiting his son’s grave. Our hope may lie in the fact that Team Trump boasts not only some of the worst people alive, but the stupidest. https://t.co/Fpe5tFCsdK