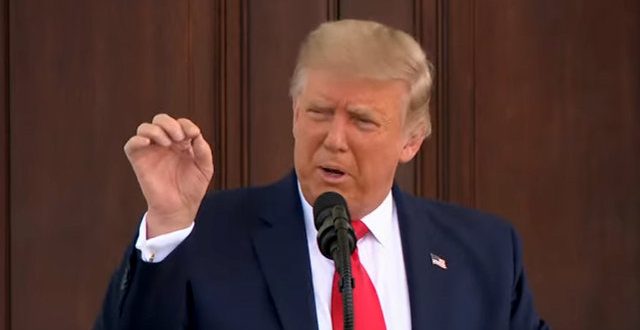 FEMA Administrator Pete Gaynor thanked the team working to protect California amid the wildfires, including Gov. Gavin Newsom (D-CA), noting that the wet season will be coming to the state soon. Following Gaynor’s remarks, Wade Crowfoot, California Secretary for Natural Resources, urged the president to take climate change seriously in order to protect Californians in the future.

“We are seeing this warming trend make our summers warmer but also our winters warmer as well.  We want to work with you to really recognize the changing climate and what it means to our forest, and actually work together with that science.” Trump then promised that “It will start getting cooler,” prompting Crowfoot to add that the science does not agree with that claim. “I don’t think science knows, actually,” Trump replied.

Check out Trump’s body language as Gavin Newsom informs him that the vast majority of forest land in California is owned by the federal government pic.twitter.com/HqoIDQYbd3

On climate change and fires, Trump says weighed in on “explosive trees.” Here’s what he said:
“You go to other countries and they don’t have this problem, but they have more explosive trees, meaning they catch fire much easier. So we have to talk about that.” pic.twitter.com/vxeNrvsmBb

President Trump shrugged off climate change as a key factor in the historically disastrous wildfires ravaging the West Coast, telling reporters that clearing forests of dead leaves and trees that can “explode” is what’s necessary to limit the impact https://t.co/LNbJFkzUbK

Watching Trump explain forest fires is like watching a 3rd grader lie his way through an oral report he never cracked a book on.

“After 18 months, Trees are explosive”

You assholes that voted for this guy owe the planet an apology.

President Trump: “You go to Europe… They’re very, very strong on management, and they don’t have a problem. They really don’t have, with, as they say, more explosive trees than we have in California.” pic.twitter.com/SOTG9vbZ1a