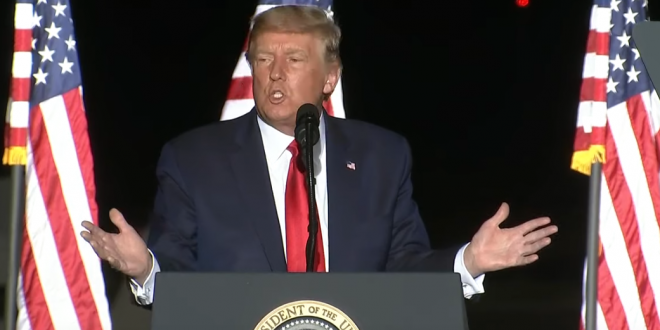 Trump At Super-Spreader Rally: “Now I Can Be Vicious”

Kicking off a Western swing, President Donald Trump barreled into Nevada for the weekend, looking to expand his path to victory while unleashing a torrent of unsubstantiated claims that Democrats were trying to steal the election.

Trump defied local authorities by holding a Saturday night rally in tiny Minden after his initial plan to hold one in Reno was stopped out of concern it would have violated coronavirus health guidelines.

Unleashing 90-plus minutes of grievances and attacks, Trump falsely claimed the state’s Democratic governor tried to block him and repeated his false claim that mail-in ballots would taint the election result.

Fuming over a new ad about his alleged disparagement of U.S. military personnel, Trump arrived here with a torrent of insults ready to go. “Pathetic Joe. He’s a pathetic human being to allow that to happen,” Trump said the ad Biden’s campaign released last week, which seized on comments Trump reportedly made about America’s fallen soldiers.

“But you know the good part?” Trump continued. “Now I can be really vicious. Once I saw that ad, I don’t have to be nice anymore.”  The president also claimed Biden, “doesn’t know he’s alive.”

“Sleepy Joe Biden. You know where he is now? He’s in his damn basement again,” Trump told the crowd. The coronavirus seemed far from the president’s mind when he stood before supporters on Saturday, railing against “bird cemeteries” that accumulate beneath wind turbines.

Trump on Saturday repeated unsubstantiated claims that mail-in ballots would contribute to widespread voter fraud in the November election. “The Democrats are trying to rig this election because that’s the only way they’re going to win,” he said to cheers and applause.

In a meandering 90-minute speech, Trump touched on some of his campaign’s themes, including protecting the Second Amendment right to bear arms, securing the U.S.-Mexico border, ending ongoing civil unrest and beating his Democratic opponent, former Vice President Joe Biden.

“Let’s face it – Joe is shot,” he said. “He’s going to be locked up someplace, and the radical left is going to be running our country.”

This MAGA stampede sprinting for a front row seat to see their cowardice leader – with the Village People blaring in the background is peak 2020… pic.twitter.com/x5A0SPmDQU

“Hispanics like tough people, people who are going to produce jobs.”

“Joe Biden’s party continues to attack the border agents, which half of whom, happen to be Hispanic Americans, I know all of them. Jose how you doing? Juan how you doing?”

This is at Trump’s Rally in Nevada today. What do you see?

“We’re gonna win four more years in the White House, and then we’ll negotiate, because based on the way we were treated, we’re probably entitled to another four years after that” — Trump, slurring, began his rally in Nevada by teasing that he intends to serve more than two terms pic.twitter.com/dgPjimP7Rv

U.S. President Donald Trump told supporters at a rally in Nevada its governor, Steve Sisolak, and Democrats are going to “rig” the election, after local officials tried to block public gatherings on his campaign trail due to coronavirus guidelines pic.twitter.com/Jxfizx4Gs2