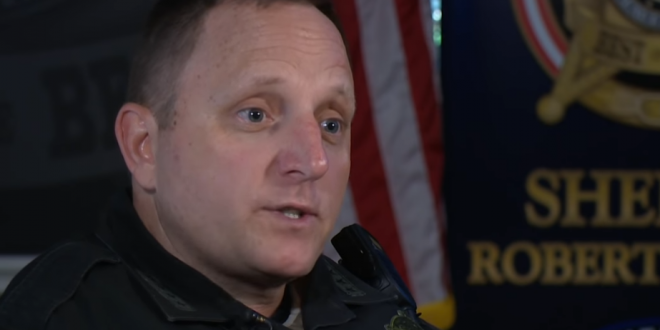 A grand jury on Monday indicted a Texas sheriff on charges accusing him of destroying or concealing video in an investigation into the death in custody of a Black man, Javier Ambler, that was filmed by a police reality TV series “Live PD.”

Williamson County records show Sheriff Robert Chody is facing the third-degree felony charge that is punishable by up to 10 years in prison. He was booked into his jail Monday on a $10,000 bond.

In June, Williamson County prosecutors announced an investigation “involving possible tampering with evidence” following the 40-year-old Ambler’s death in March 2019. Ambler died after Williamson County sheriff’s deputies repeatedly used stun guns on him, despite his pleas that he was sick and couldn’t breathe.

Body camera footage that was made public in June by the Austin American-Statesman showed deputies shocked Ambler with a Taser four times before his body went limp. The video showed Ambler pleading that he could not breathe and that he had a heart condition.

Ambler was declared dead in a hospital about an hour after he was last shocked, the Statesman reported.

The incident was caught on camera for an episode of the since-canceled police reality show “Live PD,” that never aired. The felony charge comes months after community members, local and state leaders called for the sheriff’s resignation and termination of the deputies involved in Ambler’s death. Chody has said he will not resign.

Previous Pew: 26% Of US Adults Get Their News From YouTube
Next Michele Bachmann Warns: Pre-Printed Ballots Could Be Smuggled In From China, Stored In Minnesota Barns