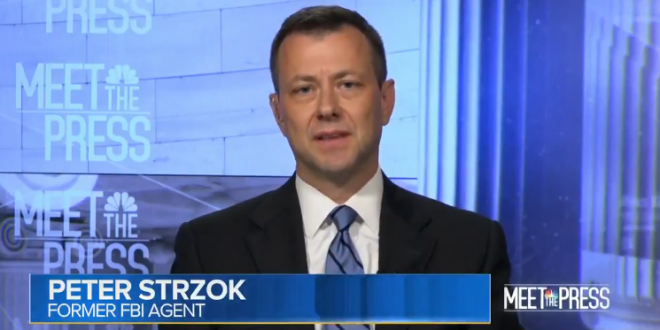 Strzok: I Still Think Trump Is Compromised By Russia

“I believed at the time in 2016 and I continue to believe that Donald Trump is compromised by the Russians. And when I say that I mean that they hold leverage over him that makes him incapable of placing the national interest, the national security ahead of his own. One of the largest ways that people in foreign governments gain leverage, certainly in the case of the president, is through financial entanglements.

“And I think when you take a look at the Trump financial enterprise, particularly its relationship with Russian, with Russian monies and potentially those related to organized crime and other elements, that those interactions have placed him in a position where the Russians have leverage over him and are able to influence his actions.” – Former FBI agent Peter Strzok, speaking today on Meet The Press.

WATCH: Former FBI Agent Peter Strzok says he continues to believe that “Donald Trump is compromised by the Russians.” #MTP

Strzok claims: Russians “hold leverage over [Trump] that makes him incapable of placing the national interest … ahead of his own.” pic.twitter.com/fEooXPJip0