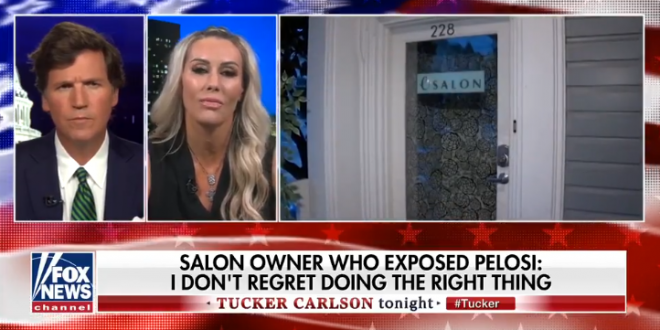 San Francisco hair salon owner Erica Kious is shutting her doors for good after controversy over a visit by House Speaker Nancy Pelosi last week destroyed her business, she told “Tucker Carlson Tonight” Wednesday. “I am actually done in San Francisco and closing my doors, unfortunately,” she announced.

Kious told host Tucker Carlson she was attacked for exposing Pelosi. “I started to just get a ton of phone calls, text messages, emails, all my Yelp reviews… saying that they hope I go under and that I fail,” she said. “So just a lot of negativity towards my business.”

“I’m actually afraid to go back… It’s a little scary and sad,” she said. “I do have a lot of positive calls and text messages from clients. But other than that, nothing but negativity.”

Last week Pelosi’s hairdresser issued a lengthy statement, revealing that the salon had been operating illegally for months and that Kious had attacked Pelosi before approving the appointment. She then ran to Tucker Carlson with the video. The following day Kayleigh McEnany ran the video on a loop throughout her press briefing. A GoFundMe drive for Kious has raised over $300,000.

Previous Lou Dobbs: Yesterday Was A “Great Day” For Trump
Next USPS Board Of Governors Supports DeJoy “100%”