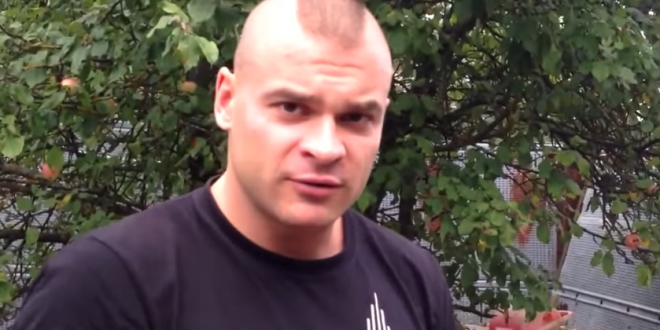 Russian Nazi Who Preyed On Gays Is Dead Of Suicide

A convicted Russian neo-Nazi has been found dead in what appears to be a suicide inside his jail cell in the Urals region of western Siberia, prison authorities confirmed Wednesday.

Maxim Martsinkevich, who went by the nickname Tesak (Russian for machete), was serving a 10-year sentence for a violent attack on synthetic cannabinoids dealers. Martsinkevich, 36, had three prior convictions relating to extremism and inciting hatred.

During his lifetime, Martsinkevich had gained notoriety for founding a group that organized vigilante attacks on gay men and alleged pedophiles.

See my many reports on this Nazi from 2013 and 2014 here. Martsinkevich’s “Occupy Pedophilia” group would lure LGBT teens and torture them on camera. Videos of the torture were then posted on social media. In one notable incident, they assaulted and humiliated a gay contestant from Ukraine’s X Factor.